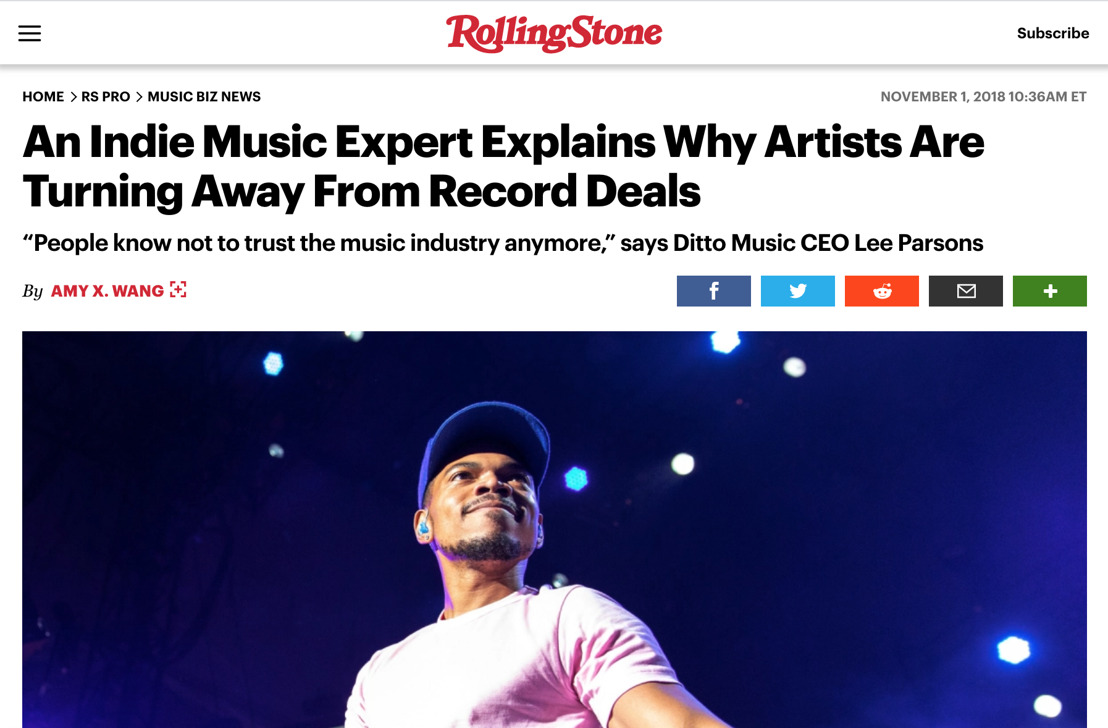 When Chance the Rapper made Grammy history last year by becoming the first artist to snag one of the coveted awards without selling physical copies of his music, the win resonated well beyond the Chicago rapper’s own résumé. “This is for every indie artist!” Chance — whose album Coloring Book beat out several massive, label-backed releases including Kanye West’s The Life of Pablo and Drake’s Views — shouted onstage.

In the wake of such a high-profile, seemingly DIY success, more new artists these days are considering going the indie route: signing with a non-traditional record label, testing novel release strategies and otherwise trying to forge a path alone. Music industry veteran Lee Parsons, CEO and co-founder of Ditto Music — an independent distribution company with over a dozen offices worldwide that has worked with artists including Chance, Ed Sheeran, Stormzy, and Sam Smith to release music to numerous digital stores like Spotify and iTunes — spoke with Rolling Stone about why the indie market is heating up, and what challenges lie ahead.

The idea of the traditional record deal seems to be breaking down these days; Spotify is offering direct uploading and even hotels are putting out albums for artists. Why’s that happening?

The problem is, whenever you see an article where there is an artist complaining about streaming royalties, it’s always because they are signed to a label. Most artists actually make a lot of money from streaming — but with a label, you’re only getting very little back of what you actually earn. Some of the artists using Ditto are repped by themselves and getting a million pounds a year, and they’re building up sales and not signed to a deal. But then you see artists who are locked into a five-album deal, and this would be a deal made five years ago or more when the music industry was still at a low point. Those are usually the ones that are angry.

A label will give back something like 20 percent of their royalties — so someone like Lil Uzi Vert, who I think made $8 million from one song, will only receive $2 million back after they take out his advance and all the money they spent. What we’ve seen in the last few years is that artists who are signed to record labels are realizing they don’t see much money. There are not many artists signed 10 years ago who have much money now, because the deals were so bad. Artists are looking at independent companies and methods for ways to keep a lot more revenue.

What’s Ditto’s place in that?

Our angle as an independent company is that we should do the same as a label, only artists are going to keep a lot more revenue. So we give them back anywhere from 80 to 90 percent of their royalties. We’re focused on sending digital up to rival the labels properly, and what we’ve found is that actually it hasn’t been that hard, with the support we’ve been getting from stores like Apple Music, Spotify, Deezer, around the world.